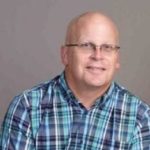 Peter Drahozal is the seventh of seven kids from a close-knit, musical family hailing from Cedar Rapids. He has pursued many different fields including electronics, railroad hobbies, reading, traveling, carpentry, camping, hunting, fishing, hiking, cycling, foreign languages, politics, religion, history, philosophy, astronomy, his Czech heritage and zymurgy (beer making), but music became his life-long passion. His early musical successes led to his love for performing (on many instruments), arranging, composing and teaching. Mr. Drahozal earned a BA in Music and Mass Communications at St. Ambrose University, and then headed to the University of Iowa for his MA in Music Education, followed by a rewarding ten-year career as a band director in several schools throughout Iowa.


He currently assists other band directors and music students as an Educational Representative for Griggs Music Co., the Midwest’s longest running music store, located in Davenport. In his spare time he enjoys developing his jazz piano skills and performing in Polka and jazz bands. He also enjoys primitive camping with friends in Yellow River Forest and hiking to a remote trout hole for a day out fishing. He is married and is raising a musically-talented son, Joseph.